California Lawyer Attorneys of the Year Award to Robert Allard

California Lawyer magazine is announcing that San Jose child molestation victims' rights attorney Robert Allard has been selected to receive one of its coveted CLAY Awards, to be presented in March by State Supreme Court Chief Justice Tani Cantil-Sakauye. The CLAY Awards are given to California attorneys whose achievements have had a significant impact on social good over the past year, or whose work is expected to have such an effect in the coming years.

Allard, a founding partner in the personal injury law firm of Corsiglia, McMahon & Allard, was honored for his extraordinary achievements in the area of public justice, according to a statement released by California Lawyer magazine.

Long before Jerry Sandusky, Joe Paterno, and Penn State highlighted the issue of childhood molestation in sports, sexual molestation lawsuits against USA Swimming (Santa Clara County Superior Court, Case #109CV149813 and Case #110CV174783) were filed by Allard’s legal team. The suits allege that USA Swimming went to great lengths to protect swim coaches at the expense of young athletes. The resulting litigation forced the organization, which oversees competitive swimming in the US and selects our US Olympic team, to make the protection of our young athletes a top priority. At the same time, the United States Olympic Committee, under pressure from Lawyers Against Sex Abuse of Children, centralized and standardized background checks across all Olympic sports, thereby ensuring the protection of approximately one million athletes.

"These lawsuits have established that USA Swimming's control group members violated, in the worst way imaginable, the trust placed in them by parents," said Allard. "This organization has known for decades that the sex abuse of swimmers by coaches was a grave problem within its ranks and did little or nothing in response until forced to do so. When it comes to protecting children from the atrocities of sex abuse, those entrusted with their care should think of the child's safety first. Selfish motivations such as money and image must always take a back seat when it comes to the reporting of molestation and abuse."

Allard actively campaigns for the use of law as a positive means of obtaining justice for his clients and in creating a safer community for all.

The prestigious CLAY awards are handed out to a select group of attorneys from different practice areas. Allard, along with the other honorees, were presented with the award on March 20th in San Francisco, and profiles of the recipients were published in California Lawyer's March 2012 issue. 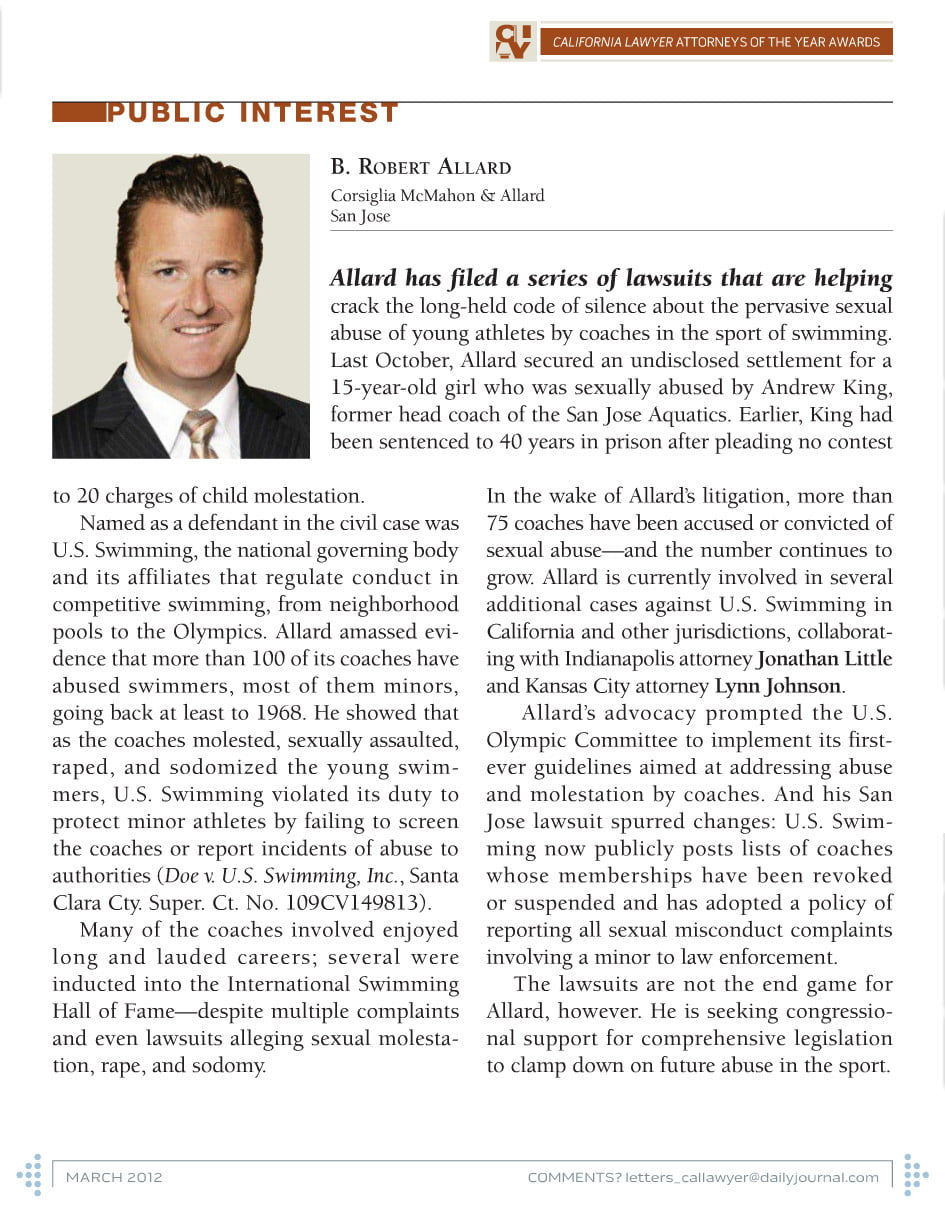 For a confidential free consultation with an attorney, please give us a phone call at 408-289-1417 or fill out the case evaluation form. We’re ready to help you.