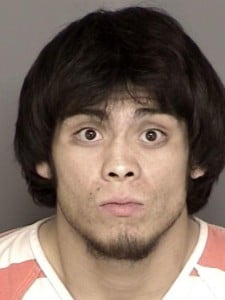 Salinas High School assistant wrestling coach Adolfo Castillo is under arrest on suspicion of lewd and lascivious acts with a minor.

Following up on a report of a suspicious vehicle parked on a street corner, police found Adolfo Castillo in the back seat with an underage girl. Further details, such as the girl’s age, have not been released by police at this time. Adolfo Castillo faces three felony charges.

This is not the first teacher sex scandal to have rocked Salinas. In 2012, the Reverend Jerome Heustia (principal of Palma High School between 1976 and 1982), Gerald "Jerry" Funcheon (a teacher at Palma in 1984), and Robert Brouilette (who taught at Palma between 1964 and 1968) were accused of sexually abusing their underage students.

Ideally, all teachers everywhere would help and educate their students, never doing them harm in any way. Unfortunately, it is easy for educators to abuse their positions of authority and violate the trust of their students.

Teacher sex assault cases in California are nothing new. In January 2016, Christopher Nugent, a fourth-grade teacher in Fresno, was arrested for sexually molesting several Avenal Elementary School students. Nugent had previously been selected as Avenal’s teacher of the year.

Educators are obligated to protect children. When they abuse their position of authority to sexually abuse children, they have betrayed the trust which society has placed in them. Victims of teacher sex abuse and their families can and should file suit against the molester and the negligent administration which permitted the abuse to take place.

Corsiglia McMahon & Allard Can Help You

If you or a loved one has been sexually molested by a teacher, contact the law firm of Corsiglia McMahon & Allard. Our specialty is child sex abuse cases. The most important thing to us is justice—obtaining just compensation for the victims of teacher sex abuse and the families. Childhood sexual abuse leaves permanent psychological scars, and these frequently require therapy and psychological care years after the abuse ends. Your family shouldn’t have to bear the cost of a predator’s wrongdoing. Corsiglia McMahon & Allard can help you protect your victim’s rights in a California child sex abuse case. Contact us today for a free, confidential consultation.