It’s an established fact in psychology and neuroscience that the earliest years of a child’s life are the most formative. The experiences a child has in the first years of life impacts the kind of adult you become. Optimally, an abundance of learning opportunities and thorough parental involvement become a recipe for a well-balanced and contented adulthood. In the worst-case scenario, 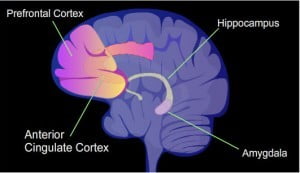 however, an unhappy childhood—full of stress, traumatic experiences, parental neglect, and other unpleasantness—can have “lasting negative outcomes” on a person’s life.

At the annual Society for Neuroscience Conference in 2012, Jamie Hanson, a researcher at the University of Wisconsin, presented some of his insights into the development of the brain and behavior of children who’d experienced stress, such as child sex abuse, in their formative years.

What Hanson has discovered in his research is that orphans and children who’ve been physically abused had much smaller hippocampi and amygdala at age 12 than children whose parents were still alive and had no history of abuse. Children with smaller amygdala and hippocampi had more behavioral problems—cutting class or getting into altercations with their peers.

The amygdala is the region of the brain which governs emotions and decision-making. Neurological research has named the amygdala as one of the most important areas of the brain for controlling aggression. A smaller amygdala would explain why children who were abused when they were young have more difficulty restraining aggressive behavior.

The hippocampus also governs emotions and is crucial to the formation of memories. A diminished hippocampus impedes abused children’s learning abilities and makes it harder for them to progress through their school years.

Ultimately, the end result of an abusive childhood, which includes child sex abuse, may be dire. Psychiatrists believe that children who suffered stressful childhoods (abused or neglected) were more likely to engage in criminal behavior, become clinically depressed, abuse drugs or alcohol, experience crippling symptoms of post-traumatic stress disorder, have unhealthy or unfulfilling relationships, and even develop physical problems such as diabetes or heart disease.

Women are especially at risk for long-term emotional and physiological changes as a result of childhood sexual abuse. New research (published in the American Journal of Psychiatry) suggests that women’s brain structure is permanently altered by sexual or physical abuse at a young age. Researchers scanned the brains of 51 women living in Atlanta, Georgia. Twenty-eight of the participants had experienced some form of abuse as children—neglect or physical, sexual, or emotional abuse. The other 23 participants had experienced little to no abuse of any kind. The average age of the participants was 27.

Researchers discovered that the abused womens' unhappy childhoods had interfered with the development of certain parts of their brains. Sexual abuse altered women’s somatosensory cortex, the part of the brain which synthesizes sensory inputs to create perceptions and sensations. In particular, the area of the women’s brains which processed sensory inputs from the genitalia was smaller compared to women who had never been abused.

This is consistent with neurological findings regarding sexual abuse. In order to handle traumatic experiences, the brain reduces the amount of signaling coming from a particular body area. This causes the corresponding areas of the somatosensory cortex to become underdeveloped and shrunken. The brains of raped children numb themselves. In other words—disconnecting neurons which translate sensory inputs from the areas of the body which were hurt during the traumatic event.

Women who had never been abused, on the other hand, showed no such underdevelopment in the brain. In abused women, the intensity and scope of the abuse-linked brain damage varied depending on the duration and severity of the abuse itself. Many sex abuse survivors, however, report numerous problems in adulthood stemming from their childhood sex abuse and the accompanying brain damage. Survivors often tell of sexual dysfunction and reduced sex drive and pleasure (perhaps accompanied by chronic pain in the genital area).

Researchers believe that the thinning of the somatosensory cortex may result in a lower threshold for pain. This means that a person with a thinned cortex would more readily perceive pain than pleasure during sex. Correspondingly, some of the women studied also showed a thinning of the areas of the somatosensory cortex linked to the mouth and face, indicating that they had been abused in these areas as children.

The Truth of How Sex Abuse Affects the Brain

It’s been an established fact that addiction leaves lasting and enduring scars on the minds and personalities of its victims. The research is still young, and much more remains to be done. But at the moment it seems plain that childhood sex abuse causes lasting physical scars upon the brain as well. As a result, this impedes the individual’s future relationships and make it difficult for them to have normal social lives. Furthermore, it can result in somatic diseases such as diabetes and heart disease.

It’s vitally important to get a victim of child sex abuse into therapy as soon as possible. In this way, the deleterious effects of childhood sex abuse may be minimized. Some measure of peace and healing is possible with psychotherapy and counseling. Call the law firm of Corsiglia McMahon & Allard at 408-289-1417 for a free and confidential consultation if you are a parent of a child sex abuse victim. We can help you.