When Dennis Thomas started teaching at Cinnabar Elementary School in San Jose, it wasn’t long before school officials became aware that he was befriending young boys and taking them to his home or to places like the Dream Inn in Santa Cruz.

One time he even took a student on a Mexican cruise and he often sexually abused students at school – making boys sit on his lap, and inappropriately rubbing and touching them.

It was the late 1970s and early ‘80s, and Thomas was teaching fourth and fifth grades.

Usually, cases that old fall by the wayside because the statute of limitations expired years ago. But in 2019 the California legislature passed AB 218, which gives sexual abuse victims until Dec. 31, 2022 to file claims against their abusers and/or the institutions that allowed the abuse to happen.

And that’s exactly what happened in the Dennis Thomas case: five men who were abused as boys hired the sexual abuse legal team at the law firm of Corsiglia, McMahon & Allard to end this sordid chapter of their lives.

Attorneys Lauren Cerri and Robert Allard represented the men in the lawsuit and negotiated the $7.5 million settlement on their behalf.

“AB 218 allowed us to help these men achieve justice against a serial predator and the school district that enabled him,” attorney Robert Allard said.

“Cinnabar elementary’s principal acknowledged in a 1975 evaluation that Thomas was spending time with young boys on weekends,” attorney Lauren Cerri said. “He’d sometimes take them to his apartment but he often took them to the Dream Inn in Santa Cruz. One time he even took a student on a Mexican cruise.”

The principal began receiving complaints about Thomas playing with “kids’ bods” and having oral sex with them in the late ‘70s.

“What happened left them with a lifetime of pain,” Leininger said. “It not only affected them but their relationships with others for decades. Some of the men had tremendous difficulty talking about being molested – one broke down crying and shaking in my arms.”

When Leininger interviewed Thomas, the serial predator – who admitted to having relationships with as many as 40 boys – showed no remorse.

“He told me he didn’t understand why the five victims were planning to sue the school district because ‘he got over it and they should, too. It’s not my problem.’ So, he doesn’t think he did anything wrong,” Leininger said. “I also interviewed several Cinnabar principals who didn’t see anything wrong with Thomas taking 10-year-old boys on unchaperoned overnight trips.”

Leininger has investigated approximately 1,000 sexual abuse cases over the years and calls this “one of the  three toughest.”

Thomas’s victims have had a tough time, too. One said he became “infuriated” when he learned “there were people who could have stopped this but chose not to,” while another said, “I can finally turn around and tell my 10-year-old self that he’s heard, and I can take his hand without shame and walk forward with him.”

The men had high praise for Allard and his team’s “impressive mix of empathy and professionalism,” with one man wishing them “all the best in continuing your efforts on behalf of children who need and deserve a voice like yours.”

Mr. Allard has been representing sexual abuse survivors for more than 20 years.

“Thomas is a devious narcissist,” Allard said. “His criminal acts were allowed because he groomed students, parents and school officials – making them think he was a good guy when, in fact, he’s a monster.”

Thomas was arrested by San Jose police in August 1981 and was admitted to Atascadero State Hospital in April 1982 as a mentally disordered sex offender. He was released to outpatient treatment in April 1984.

Mr. Allard says this case demonstrates why important for victims to come forward – no matter how much time has elapsed.

“All of these men have been diagnosed with PTSD. One man buried his secret for 40 years and suffers from ongoing emotional issues. He’s angry, has mood swings, flashbacks and problems with addiction,” Mr. Allard. “Another turned to excessive drinking and drug abuse in his early teens, and feels ashamed, wondering how he allowed this to happen?”

The men also have trust issues and will continue to face hurdles for years to come. Of course, all of this could have been prevented if the Union School District and its employees had put the safety of children first, Mr. Allard concluded.

To learn more about the work Corsiglia McMahon & Allard is doing, call 408-289-1417 or visit childmolestationattorneys.com 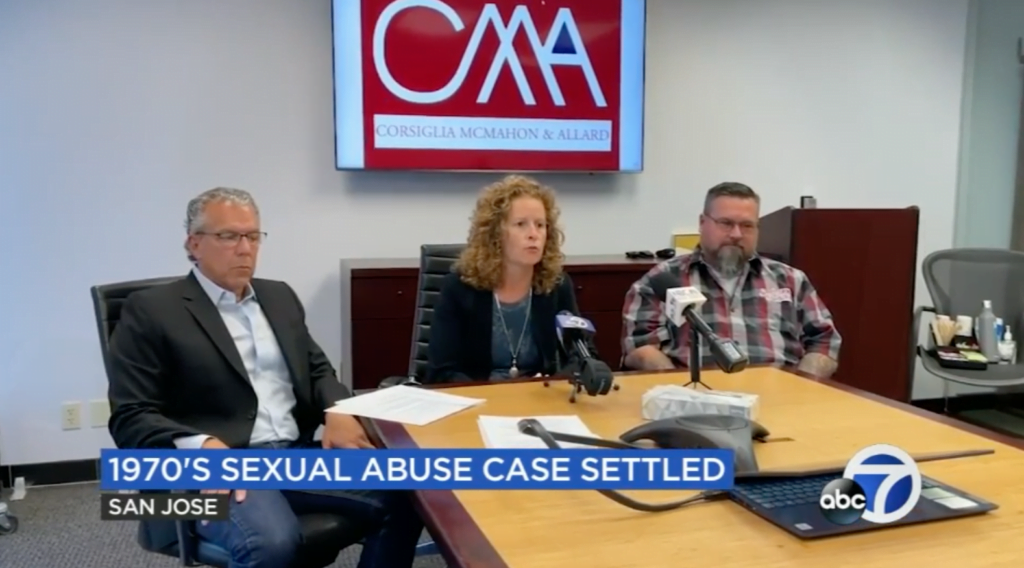